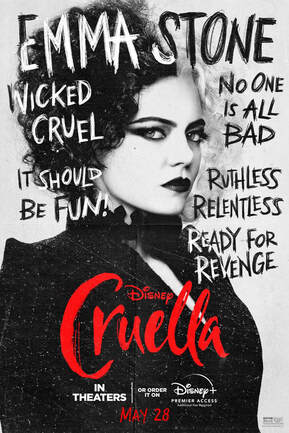 Cruella was an incredibly exciting and fulfilling experience, because the challenges, responsibilities, and personal involvement surpassed all of my  previous visualization projects. Since it was a Disney production, the funding was substantial, with the quality bar and expectations high to match. Our Technicolor Pre-Production visualization team, which included eighteen artists in total, handled postvis initially, and our role expanded into techvis for many intricate shots, and later on into previs for a surprise climactic moment in the third act. It felt like nearly everything I had learned on previous projects came into play, and it required new growth as an artist and leader.

Although it was the hope during production that real dogs could be filmed for all the scenes, in reality the breeds proved most useful as lighting and scale reference for their CG replacements. Our postvis cast included three unique dalmatians, a chihuahua with one good eye named "Wink," a terrier (puppy and full-grown) named "Buddy," three rats, and in one sequence: hundreds of moths. We would be responsible for animating thousands of frames of animation, plus tracking, lighting, roto, and compositing work.

Early on in the project, it was clear that one of the best ways I could help the team was by significantly deepening my understanding of quadruped anatomy and animation, in order to give informed and accurate animation direction. I called Marshall Vandruff, who was our visiting animal anatomy lecturer back at Rockstar Games , who recommended several book titles, and I checked out all the relevant books I could find at local libraries. One particular book that helped me enormously was How to Draw Dogs and Puppies: A Complete Guide for Beginners by J.C. Amberlyn, which provided essential tips for understanding a shape language and style that captured the essence of dogs. To better understand realistic lighting to place our CG characters into their shots, I turned to Color and Light by James Gurney. I bought the biggest sketchbook I could find, and got to work filling the pages with my drawing studies from pictures in these books and of photos I saw in internet image searches. 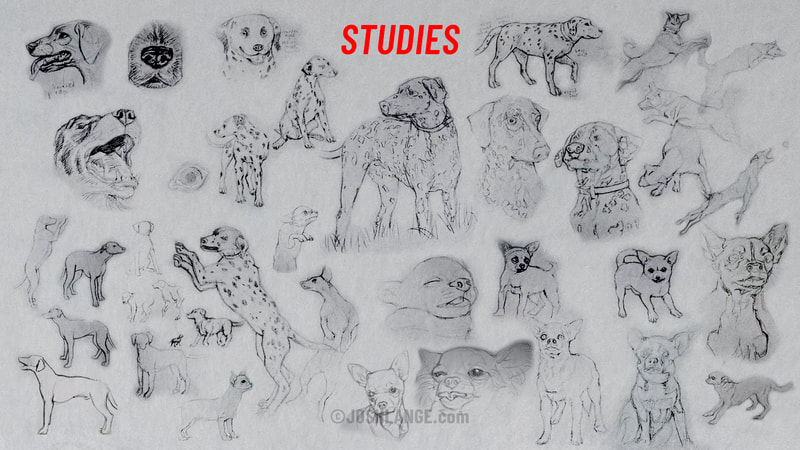 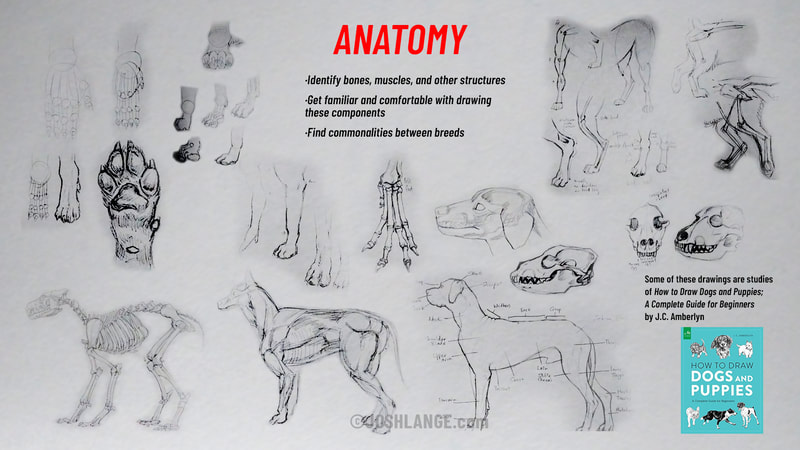 In addition to the draftsmanship practice, it was also helpful to get reacquainted with how dogs experience and express emotion. My family raised four different dogs when I was growing up, but it had been years since I lived with one, so I watched a lot of episodes of The Dog Whisperer and Dog Impossible, as well as numerous other dog shows, which was very helpful when studying all the ones I saw on the street (LA is called "Dog Town" for a reason, and there are two different dog kennel business on the same street as our office). Lessons from these shows and observations provided an understanding of dogs in a variety of scenarios and states. Along with new methods to quickly illustrate dogs, I had an improved eye for detail about them, which enabled me to give clearer and more informed feedback to animators later on. With improved direction, the animators required fewer iterations to properly address notes, which meant shots were approved more quickly by production VFX Supervisor Max Wood. 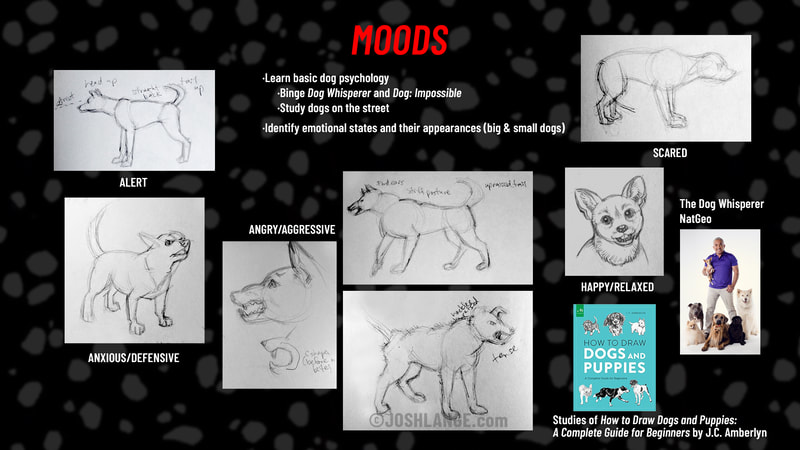 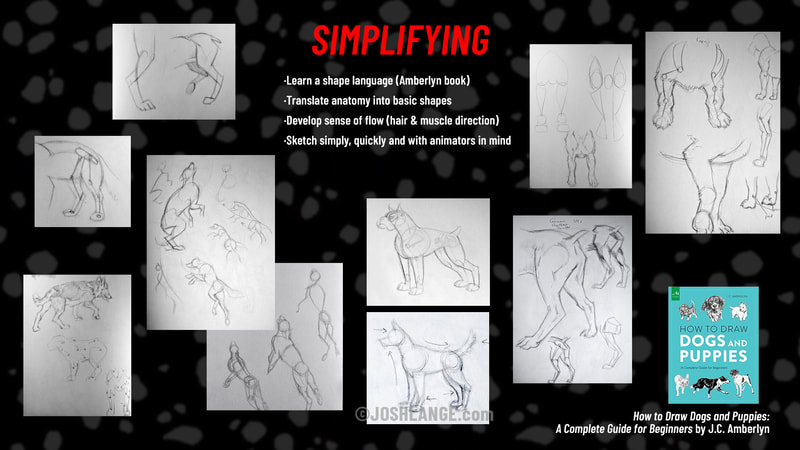 Quadrupeds are complex and a significant challenge, and since our team was comprised of animators with varying skill levels, it meant that everyone would need to be trained up to handle the coming workload. Because our work does not make it into the final film, the animation detail in visualization is in a grey area, where "good enough" wins out over "perfect." Of course, in this film it was important that our footfalls were accurate, and dogs moved at realistic speeds (a maximum run of 37mph, in the case of a dalmatian). Online resources like the Animation Reference Dog Walk and Run Cycles, Michael Schlingmann's Quadruped Locomotion Tutorial, SportsVet, and Dan Fotheringham's Creature Animation Master Class with Griffin Animation Academy were enormously helpful, as were the countless treadmill and animal motion capture videos I assembled into these YouTube playlists for the project: 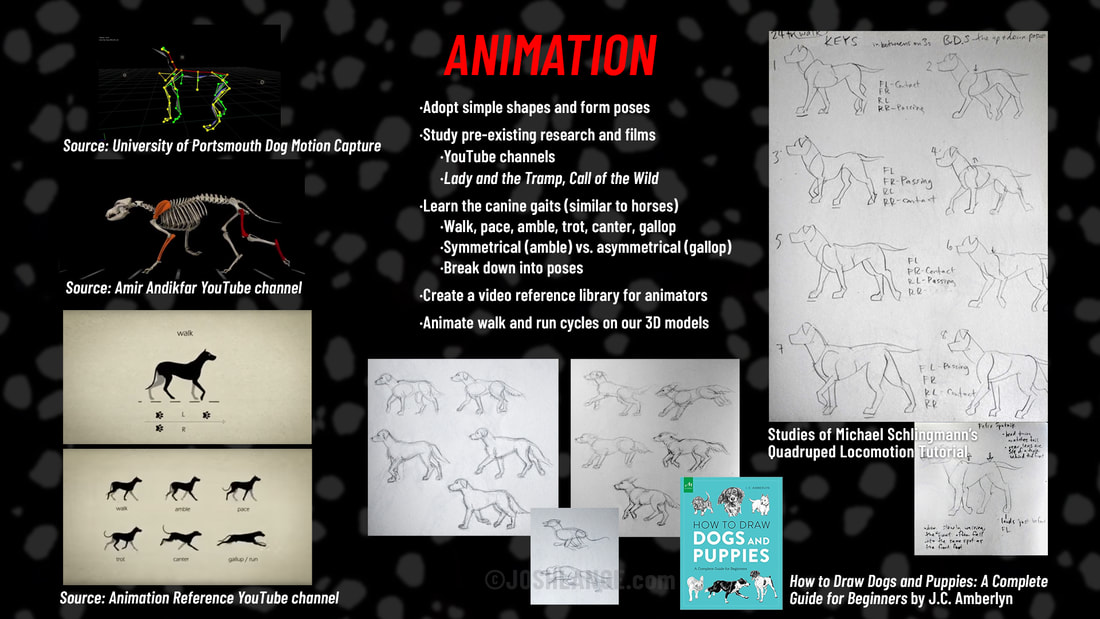 In addition to creating convincing animation, another challenge was the converting hundreds of plates from the shoots into finished scenes that would hold our composited characters. Many of the plates had no stand-ins for our characters, so we had to time out our animation by eye, and some shots underwent retiming, which meant redoing the rotoscoping. Sequences that took place outside the Hellman Hall mansion featured massive bluescreens, which required intricate rotoscope and paint work in large areas for dozens of shots. Many plates had heavy amounts of motion blur from quick camera movement and fast-moving actors, which made camera tracking and rotoscoping very difficult. Oftentimes, the sensitive timing in a plate required us to animate to specific timing and space windows, like in a chase sequence where four running dogs had to be carefully positioned between the legs of panicking crowd members in a party scene.  At other times, we manufactured plates to fit our needs, like in the case of Horace pretending to spray gas on a CG Wink dressed as a rat. Other challenges involved adding FX like smoking moped tires and exterminator gas. By early 2020, our team was proving capable of meeting all sorts of challenges. There was even one shot that allowed us the opportunity to collaborate with the artists in the Technicolor Pre-Production Art Department, so it truly felt like a project that maximized direct collaboration with everyone in film at the MPC studio.

Right before the Covid lockdown came into place in Spring 2020, there was a period when, at one point,  every single one of our artists in the visualization department had worked on the show. Months into the lockdown, a smaller group of people completed the film remotely. I am immensely proud of how much effort, cooperation, and improvement the team members showed over the course of the project, and the result of all their work speaks for itself. In total, our team worked on over two-hundred shots across fifteen sequences. The final film, which came to two and a half hours, contained nearly all of the shots we had worked on, and despite the challenges of a remote production, it was still able to release on its original release date of May 28 2021. It was the first large world premiere in Los Angeles after theaters reopened.

Technicolor’s Post Visualization team joined forces with MPC Film on Cruella, working on 15 sequences within the film. Utilizing character assets created by its Character Lab team in Montreal, the team’s work largely consisted of animating CG dogs and compositing them into plates with a variety of complexity and lighting. Working alongside them was the Art Department; Senior Concept Artist Ivan Khomenko and Art Director Leandre Lagrange fleshed out the environments and key story moments, envisioning Cruella’s world in 1970’s London with the creation of concept frames for the VFX team.

“Cruella was an enormous and exciting collaboration for our team of thirteen visualization artists,” said Technicolor Post-Vis Supervisor Josh Lange. “Operating from Technicolor's Pre-Production department at the MPC office in Culver City, Los Angeles, we joined up with MPC's wide network to utilize assets created by final VFX teams at the offices in Montreal and London.

With this foundation, we animated scenes with complicated quadruped body mechanics, drama, intensity, subtlety, and even broad comedy. VFX Supervisor Max Wood guided us along the way, as we completed bluescreen-heavy shots and explored ways to design a pivotal surprise moment in the third act.”
This was the team’s first production affected by the COVID pandemic, but they quickly pivoted to fully remote working conditions, where post-vis artists seamlessly continued their work until early Autumn of 2020, followed by the VFX team wrapping in Spring of 2021.
“Looking back at the efforts of our team and MPC/Technicolor as a whole, I am tremendously proud of our exceptional artists and what they achieved under such unusual conditions on this project,” concluded Lange. 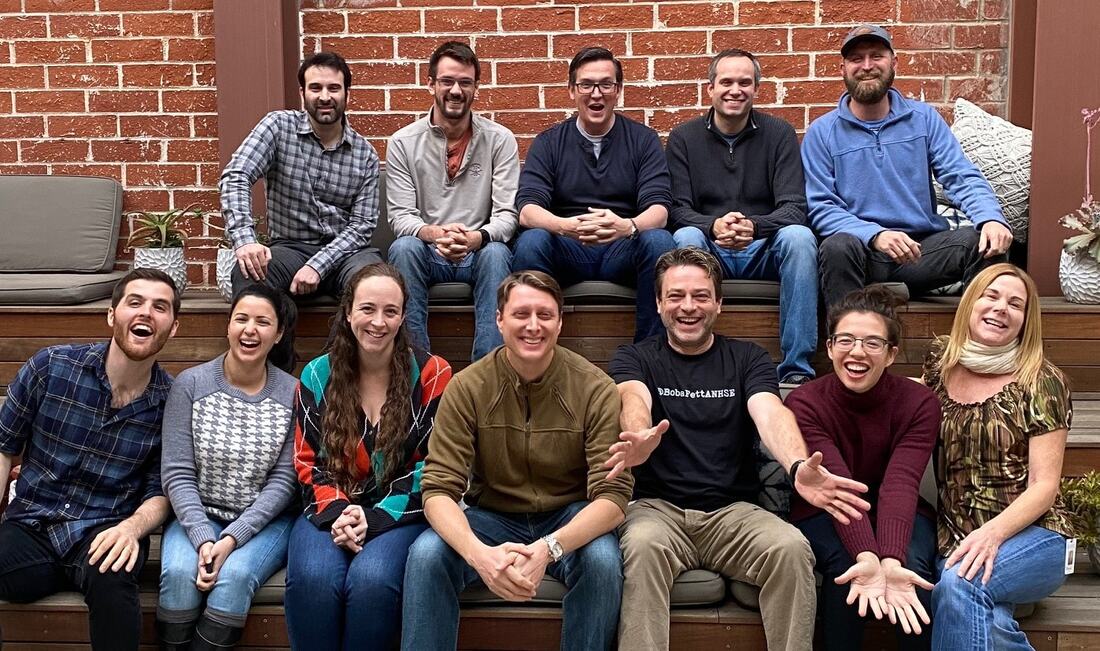 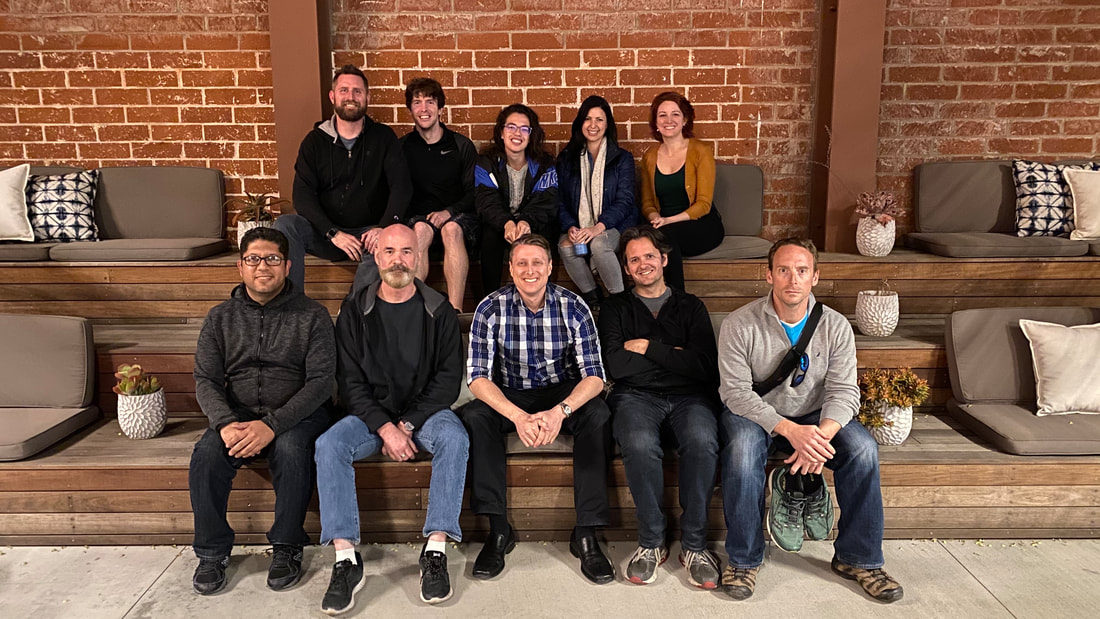 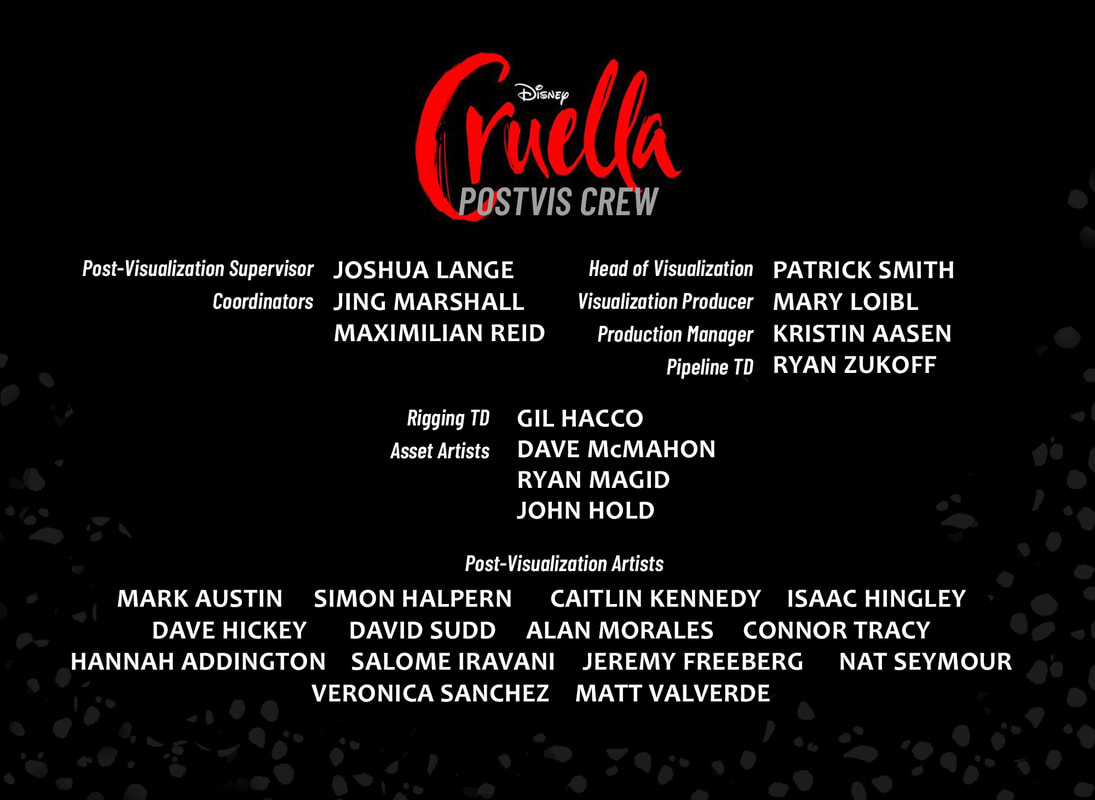