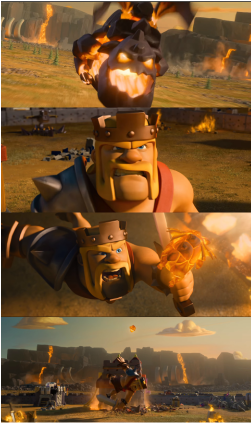 For this commercial, the Proof previs team worked on-site at the inspiring Venice office of video production house Psyop, inc. The team there was very friendly and accommodating, which made collaboration up-close and enjoyable.  We were able to use their character rigs, and build on the series of successful commercials the studio was known for over the years. Playing with the scale of the characters and the layout of the base were the most slippery variables to manage, but by the end, we balanced those across tens of shots. Each previs artist was responsible for continuous "chunks" of shots, and the background environments were arranged according to each previs artist's taste. The actors in the live action shots were still being decided on while we worked, but ad agency Barton F. Graf 9000 ended up casting Christoph Waltz and James Corden in the end.

Section on which I worked:
Lava pup flies toward base
Barbarian King faces off with Lava Pup