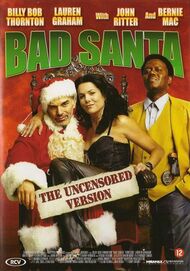 Through what I can only assume was a marketing decision by Microsoft, there is a scene in Bad Santa that has in-game footage of Tao Feng: The Fist of the Lotus (on which I was a mocap animator) in the background of the scene where Bernie Mac busts a young shoplifter in his music store. Technically speaking, it's the first time any of my work was seen in a feature film.