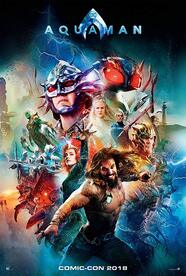 Aquaman was a one-week stint, working on a few shots as The Third Floor began its postvis work on the film. It was helpful to continue working with PFTrack, which I used previously on Avengers: Infinity War and Deadpool 2, as well as After Effects to composite the deep sea creatures as they pursued Arthur and Mera toward the ocean floor. A unique challenge for the project was posed by the reflective armor the characters wore amidst a bluescreen set. Knowing this would eventually end up with a bluish tone for the final underwater look, I did not envy the work the final compositors would end up doing. In the end, the film came out ambitious and wondrous, with plenty of budget put toward the final look of the VFX, and it was no surprise that these new sights dazzled audiences and made it a massive box office success.
​
Sequences on which I worked:
Swim to bottom of trenh
Third act battle