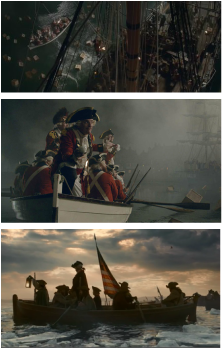 This was the first commercial on which I had worked. I had been curious about commercials after having done video games, feature films and a theme pak ride, so it was fun to finally get the chance. Having worked on 300: Rise of an Empire, I was familiar with the director, Noam Murro, and I enjoyed the spoof humor of the ad (although it turned out to be somewhat controversial based on a backlash on Twitter once it aired).

Sequences on which I worked:
Sons of Liberty storming the HMS Surprise
Agency