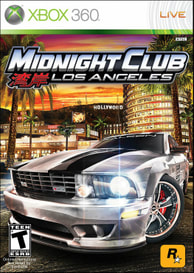 Midnight Club: Los Angeles followed my first run of time working on Red Dead Redemption. The "MC" series had already released three full games, but none had sold enough copies to be a true hit to sustain the San Diego studio on their own. MC:LA was a large step-up in terms of scale and ambition, with an abbreviated version of the city of Los Angeles, ranging from the hills to the 10, to the ocean, to just east of downtown. Now that I live here, I have recognized plenty of the landmarks I drove by in the game, including the The Third Floor building on Wilshire, where I would work two years later.

Driving animations were simple, but we had to animate the full character (not just the arms) since replays could show the drivers from all angles. Ambient character idles were made to populate the cutscene areas where players would go to meet a character or get their car fixed, and cutscenes of all kinds would play throughout the game as your character's career progressed.  One of the challenges we had for the game design was avoiding black fade ins and fade outs as much as possible, thus keeping the player immersed in the world continuously. This posed a problem for cutscenes, which typically fade in to allow for all the cutscene elements to be loaded into memory. The solution our Animation Director had was to move the camera from behind the player after he pulled up near a cutscene area, and put it into a position where scene elements could stream in without being noticed. As a result, almost all of the game cutscenes have the camera flying to a place pointed away from the nearby ground. An example of this can be found here.

As Lead Cutscene Animator, I was flown to New York City to work on the cutscene/ambient character mocap shoot. It was a treat to see the corporate headquarters and meet the people who oversaw the games being made at North American and European studios, and I made it out to see some of my favorite comedians at the Comedy Cellar and Raffifi's. Once back in San Diego, I went on to help script the components of the cutscenes, used the San Diego studio's Vicon mocap room to shoot other motions needed for the game, and oversaw the completion of all cutscenes. Part of the car license requirements meant that cars could not collide with people, so I also worked with our AI programmer to help with the "evading" ambient character animation.

By the end of production, the game looked fantastic and was a lot of fun to play. Unfortunately, reviews came back criticizing how difficult the game was at its normal mode. MC: LA had lots to offer, and there are plenty who love it, but if it had been slightly easier to play, it might have broken through and been the big success we hoped it would be. The studio followed up with the downloadable content expansion called Midnight Club: South Central, which expanded the drivable world and added more cars and hangouts. Plans were going ahead for another Midnight Club game for which I was to be Lead Animator, but the project was eventually cancelled, and I was switched over to work on cutscene support for Grand Theft Auto: The Lost and the Damned.