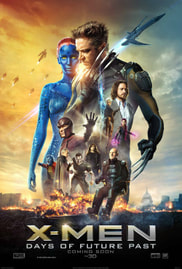 X-Men: Days of Future Past was the second film I worked on of Bryan Singer's. His approach to previs is very experimental; no sequence is ever locked down until very late, so there are more revisions than maybe other projects have. It was a bit difficult to first adapt to on Jack the Giant Slayer, since it required not getting too "precious" with any certain shot or sequence. Once the right mindset is adopted, however, previsualizing can be enjoyed for its true purpose and strength: as a tool to help hone and improve how to best tell a cinematic story. The movie was an interesting blend of melodrama and action, and stitched the dual universes excellently. It turned out that none of the shots I worked on ended up in the final film, which was a good reminder to not get precious about them.  Later, a second "Rogue Cut" version was released on Blu-Ray, which contained the scenes on which I worked.

X-Men : Days of Future Past received an Academy Award nomination for "Best Visual Effects" in 2015.

Sequences on which I worked:
Rogue Rescue (only in Rogue Cut Blu-Ray release)