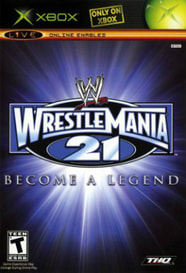 WWE Wrestlemania 21 was a project I worked on, at first as an Animator editing motion capture, and later as an Animation Tuner using proprietary software to trigger scripted events during cutscenes. It was Studio Gigante's second title as a company, and created the entire game and its engine from scratch in a year and a half. Through some oversight, I was omitted from the credits. In a surprise move, THQ later pulled their contract from Studio Gigante, which helped cause the company to go out of business. Less than ten years later, THQ also went out of business.