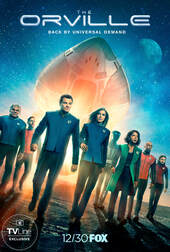 It was an amazing challenge to be part of season two of The Orville. Not only did it truly put to the test my knowledge and passion for space sci-fi projects, but the role I had as Previs Lead had me running on all cylinders training up our amazing Interns and Juniors on the team so we could all soar together. Matt had two other artists with him embedded with Seth McFarlane's production in New York, so I oversaw the "home team." We had a lot of freedom to be the first to interpret scripts, with no storyboards (I even made some storyboards myself for one episode) and no feedback with directors, we flew blind for quite a while on each episode, only to have Seth's notes come in weeks and sometimes months later to help clarify his vision for our sequences.

In the two-part "Identity" arc of the season, done for sweeps week, a major space battle was at the heart of the mid-season climax. It was finally my chance to do something close to what teams had been doing in the Star Wars franchise, and it took a massive effort for all the shots to get done in time. Once the season started broadcasting on Fox, we had the weekly treat of seeing our work air each Thursday on the major network. I had never worked on a television series before, so this was a first for me.

As previs completed, I transitioned into the Layout Supervisor for our team, and taught them how to best convert our previs files (which used a different scale) into Maya files that alembics could be exported from for the finals team to get to work. As we refined our animation notes from Seth during the layout process, we sat in with Nhat (VFX Supe) and Dan (CG Supe) on dailies, which brought a high bar for scrutiny and kept me sharp.  I enjoyed my time at Pixo, and was thrilled when our studio's team was nominated for an Emmy for Outstanding Special Visual Effects for the "Identity" episodes. Another fond memory for me there was the "Bring your child to work day" event that they threw so artists could bring their kids in to see the office up close. By the time I was finally done at Pixo, it had been just over a year, and I had a lot to show for it.

AWN: Watch Pixomondo's Orville Season 2 Previs and VFX Reels
"As you watch the previs reel, note the degree of detail in the shots, including lighting cues, ship designs, camera placement and blocking of the action. It’s obvious from the demonstrated shot comparisons that Pixomondo’s work played a much greater role than just action sequence visualization by providing MacFarlane a sophisticated creative tool for bringing his ideas to life in the early parts of production."

FX Guide: The VFX of The Orville, Season Two
"The previz team quickly and very successfully pre-vized the arrival sequence.  The show’s creative team responded very strongly to the visuals of the sequence. The final shots, while very complex and detailed, came together remarkably quickly. As seen in the video below there is a very clear and direct path from Previz to the final V-Ray renders."

"Pixomondo previsualized over 1400 unique shots for the 13-episode second season, including over 350 shots for the universally acclaimed 2-part episode, Identity."

"Being used more than just as a narrative guideline, the previs for The Orville was systematically treated as the final shots in edit by the production. The visualization lended itself beyond just a template for action choreography and composition, but was heavily utilized in the art directive side as well – helping establish lighting cues, ship design, color theory, and general look development for the show."

"Because the production was so invested in the previs, it provided a 1:1 blueprint for the finals team and brought Seth MacFarlane’s creative vision to life almost a year before each episode hit network."

Big thanks to @Pixomondo for their continued brilliance in VFX for @TheOrville! 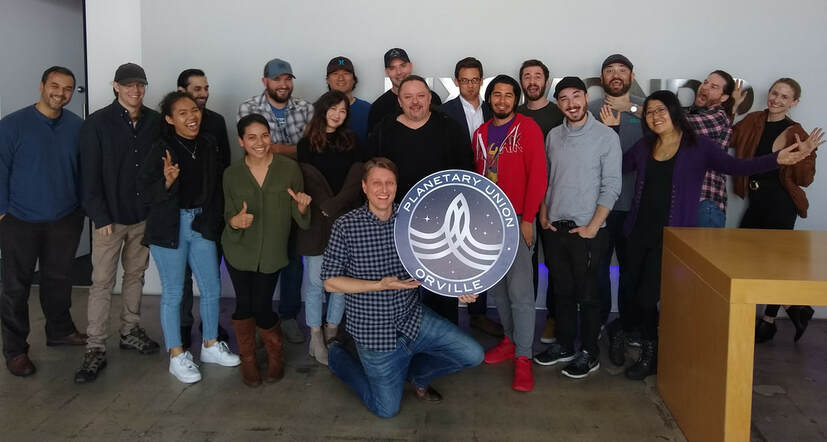 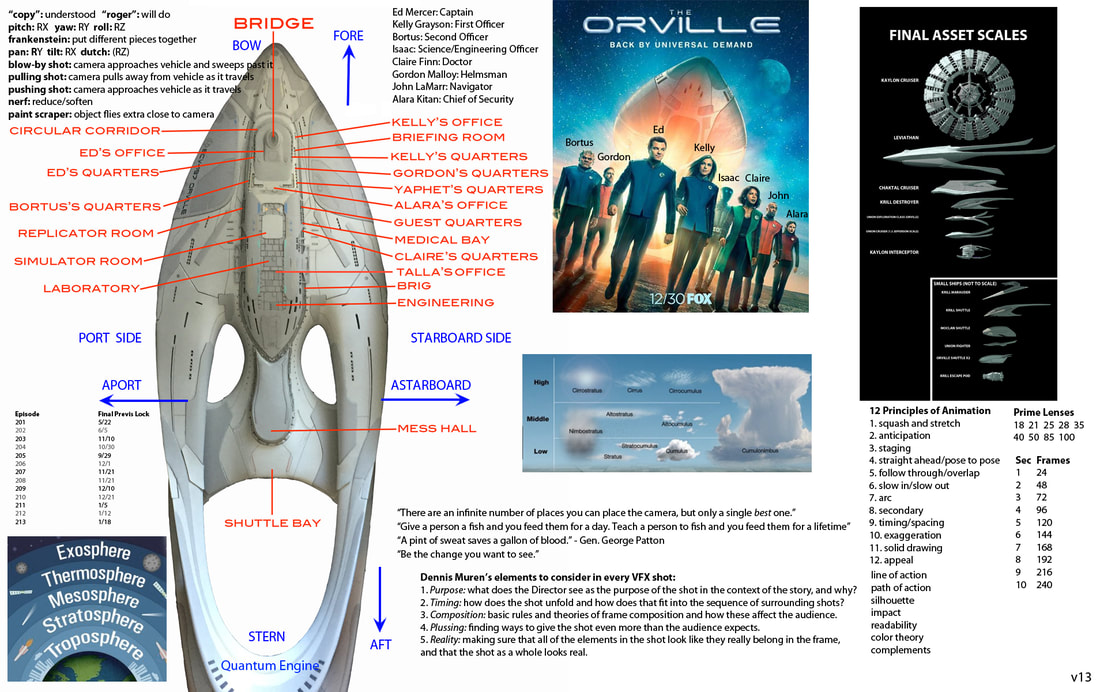 My computer's desktop reference guide while on The Orville. It had most of the crucial information that was commonly needed by our team.