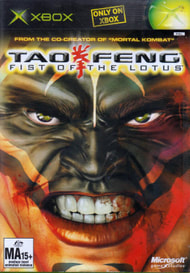 Tao Feng: Fist of the Lotus was the first video game on which I have worked. I was fresh out of school and got the job at twenty years old. A friend had to sign me in for the hotel where Studio Gigante put me up when I interviewed, since the hotel said I was too young to do it myself at the time. The founders of the company had come from Midway, and were building a games company of their own, with Tao Feng being their first title as a third-party developer for Microsoft. My coworkers were lots of fun (the company was never bigger than sixty people), and I enjoyed being part of their startup experience.

Living in Chicago was phenomenal. The city is massive of course, and packed with places and sights that I absorbed as much as possible in the three years I lived there: the Lincoln Park Zoo, Comiskey Park, Wrigley Field, United Center, the Field Museum and Garfield Conservatory, Wicker Park and its artistic hipsters, the Lyon's Den comedy bar, Second City, Zanie's--I could go on forever. There was a day where I went with a friend and shot eight different movie theaters with an 8mm camera, and I would drive up to Wisconsin and Indiana for trips outside the city.  It was only until I moved to Los Angeles that I returned to that feeling of being swallowed in an urban jungle.

The animation team was close, and I still keep in touch and have even worked with some of of them after the company closed in 2005. It was my first professional gig as a Maya animator, and transitioning from school was an adjustment, to be sure. I was used to literally sleeping overnight on chairs to work as much as possible on my student reel, I continued the pattern of staying late to make sure I established a workflow that could deliver on what the company needed. The project provided the chance to use Lightwave as well, being the only animator assigned to lip sync animation for all of the cutscenes.

Since we were a small team, we bugtested the game ourselves all the time, and it was a fun experience to get good at the game as a result. After the game was released, some of us went to a tournament held by the company and watched kids play the finished product. It was the first time I had been part of a project and seen its public reception.

Notable Work:
Motion capture cleanup and finaled animation for Iron Monk, Jade Dragon, Divine Fist, Exile, Wulong Goth fighting sets, using Autodesk Maya
Throws and Special Moves for each character
Keyframed all facial animation and lip sync using Lightwave
Cutscenes
I cleaned up the body motion capture in Maya for each of these clips, and keyframed all the facial animation in Lightwave
Fighting move combos, throws, and special moves
I cleaned up the mocap and finalized the attack animation in each of these clips using Maya
Motion Capture Breakdowns
Clips showing each stage of my mocap cleanup 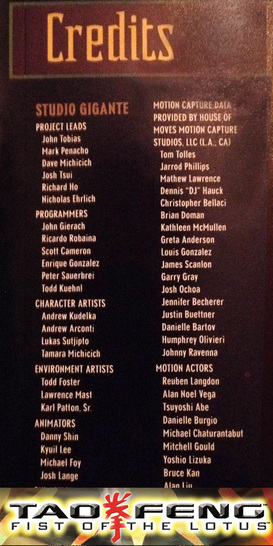