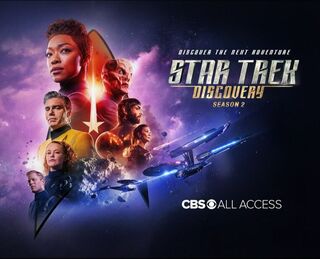 ​My first project upon joining the group at Pixomondo was to help revise and expand the "pod race through the asteroid field" sequence. I contributed by helping intensify the sense of danger the shots showed. Working with asteroid fields was a fascinating challenge, because the multitudes of rocks can enhance the composition as the animator guides the eye of the audience.

For episode two, director Johnathan Frakes requested a very specific animation maneuver for the Discovery ship to perform, to release a stowed rock into a ring of asteroids. It was enjoyable to try putting the ship through an unusual animation like that.

Later on at Pixomondo, I would return to the Discovery team to help with layout and final animation duties for the final two episodes, one of which Pixomondo was nominated for an Emmy nomination for Outstanding Special Visual Effects.