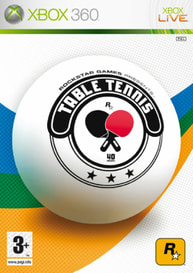 Rockstar Games Presents: Table Tennis was the passion project of Rockstar Games president Sam Houser, who was a huge table tennis fan. When it was revealed that the company famous for the violent Grand Theft Auto franchise was making a table tennis game, there was a lot of curiosity about how we'd do it. In the end, there was very little we stylized about the game; there was only an "in the zone" power meter which filled as you built up your rally, characters and environments were modeled with ultra-realistic detail (down to the sweat glands), the music was low-key. Animations, although realistic and without much time allowed for flash, had to smoothly blend together and cover a wide range of world space locations with pinpoint accuracy. Each player character had their own subtle variations in playing style and range of motion, which required most to have unique animation sets. The game was very fun to play as we developed it, and a good portion of the studio also played the real-life version every day on the studio's two tournament-quality tables. To this day, I still have my paddle with custom rubber (pips on one side, smooth on the other). The game is a great example of how to keep the scope of a game small, in order to be executed at a high level.