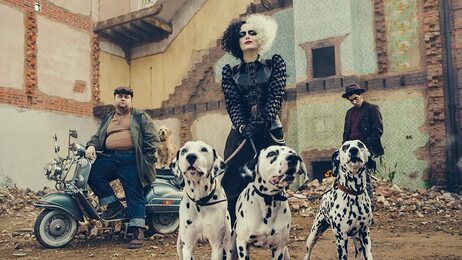 was an incredibly exciting experience, because it surpassed all my other previous visualization projects in terms of my personal involvement. My primary role was as postvis supervisor of the Technicolor visualization team, but our team also prevised and techvised many intricate shots to help improve the shot design and production efficiency of the director's pickups and reshoots.

The VFX Supervisor oversaw all the shots that MPC would handle in finals, and since Technicolor owns MPC, it felt like a real "all hands on deck" team-effort, with some shots requiring collaboration from our art department down the hall, to the London office where the final character models were being created.

Within our visualization department, there was a period when every single one of our artists at the office had worked on the show at one point.

Quadrupeds are a formidable animation challenge, and this project involved hundreds of shots that featured this kind of motion, along with numerous plates that required intricate rotoscoping and compositing.

Since it was a Disney project, the quality bar and expectations were high, and it required a lot of training for junior artists and animators to get them familiar with our tools and methods. I am immensely proud of how much effort and cooperation the team members showed over the course of the project, and the result of their work speaks for itself.

Everything I had learned on previous projects came into play, and it required new progress and growth as an artist and leader.

An early challenge was proving our worth to the director, who


​
Sequences on which I worked:
Mineshaft chase