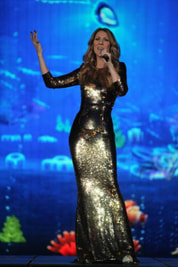 China Central Television's Spring Festival 2013 was a series of programming made to celebrate Chinese New Year, aired on the largest television channel in China. For one of its programs, singer Celine Dion performed the theme song from the movie Titanic, "My Heart Will Go On" (Titanic remains one of the most popular movies to ever play for Chinese audiences, and Dion is a megastar over there as she is everywhere else). The Third Floor was hired to make the CG visuals that would play on an array of LCD panels, which were arrayed around an elaborate performance stage.


Since Titanic is a movie about a sinking boat, the images we created were for an underwater scene, rendered to make it look as though Dion was performing from the bottom of the ocean. Lighting and camera moves were also synched up with the visuals to help reveal her in the stage, as if emerging from the depths, and to help sell the CG visuals. Offsetting the animations to help fill out the ocean floor environment at just the right times took some time, but the final video came out well.


Dion's performance was watched on over one billion television sets, and earned rave reviews.
Footage of the Live Chinese Television Broadcast