"I worked with Josh on 'Red Dead Redemption'  for about 5 years. He is a very talented person in character animation and very organized in general, with a good attitude. I was very happy to work with him."- Sangsoon Park, Animation Supervisor at Rockstar Games, San Diego

"Josh is a skilled and thoughtful animator, an educated and informed artist. He is a pleasure to work with leaving any ego he has at the door whilst articulating his ideas and point of view in discussions about work. His awareness and understanding of contemporary media and culture means he brings a sharp eye to the table which is a plus for anyone working with him. I would work with Josh again with no hesitation."
- Alex Horton, Head of Animation at Rockstar Games, New York City

Red Dead Redemption, or RDR2, it was called at the studio, was as epic to make as the game itself. I first saw it on people's work stations during my job interview tour in 2005 (for a glimpse at how the game looked back then, watch this E3 teaser from 2005), but it would be another year before I would work on it myself, since I first worked on the studio's Table Tennis game. I was always interested in seeing the latest builds as they were being tested, and I kept tabs on it as it evolved over its mammoth five-year production schedule.

Later on, I became responsible for the firearm animations for the player character, John Marston. There were pistols, revolvers, rifles, repeaters, and shotguns--about 22 in all, and although several shared the same animation sets, there needed to be separate sets created for when Marston was riding a horse. We changed animation directors partway through development, and with the new director came the decision for a new base pose for Marston's standing idle. This pose change meant that hundreds of existing animation assets needed updating to ensure smoother blending, which was a lot of work. I also spent time on the cutscenes team helping to hook up effects, props, weapons, and other details to the character animation that required setup.

As we neared time for the game's release, it was hard to ignore the large number of bugs that remained unresolved in the game. People were working as hard as they could at every Rockstar studio to solve what they could, but the game was enormous, and we knew it would need to be patched upon release. However, once it released, the game was stable and complete enough to be a wild success, and we followed-up with patches to fix bugs as quickly as we could. RDR went on to surpass everyone's sales expectations, and when it came time for awards season, I wondered if BioWare's successful Mass Effect 2 would be the favorite for "Game of the Year;" however, I was pleasantly surprised to see publication after publication award its top honors to our game. RDR2 also won the Game Developer's Choice Award, which is decided by peers in the video game industry. My wife and I were in a hotel room at the time, and I ran to a nearby store to pick up a bottle of champagne to celebrate (I still have the cork). It is truly humbling and satisfying to put your all into making something as good as you can, and to be met with respect and acclaim from those who pay the most attention to your medium. 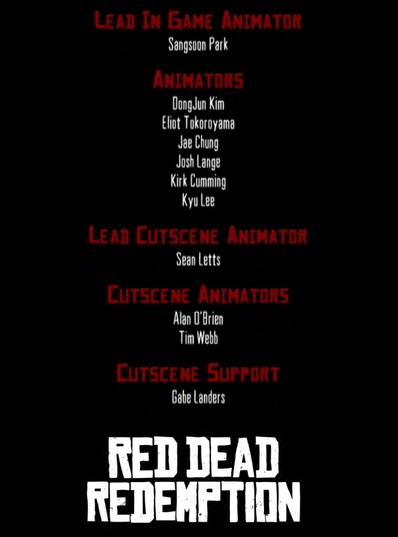