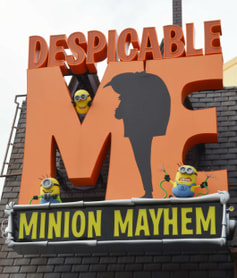 Despicable Me: Minion Mayhem was a project like no other. A theme park ride that originally opened for the Orlando Universal Studios theme park, it was a critical and commercial success, winning the Annie Award for Best Animated Special Production and the VES Award for Outstanding Visual Effects in a Special Venue Project.

It was technically a movie and not a traditional "ride," consisting of a four-minute continuous shot. Since most of the experience is through the point of view as a minion, the ultra-wide camera lens used made it more difficult to position elements on the screen (most objects of interest had to be located in a "sweet spot" in the bottom center of the screen). It was projected on a large theater screen for Universal's dailies to test out how our animations were working when viewed through stereo 3D glasses. I helped with the introduction portion, but the section I prevised by myself was the last part where Groo discovers a surprise party carnival arranged by the girls and the minions. Every detail had to be locked on and perfect for Illumination to do the final animation off, and the final ride looks nearly identical. Our previs was not approved for release, but there are some videos online of people's experience at the ride.

Notable Sequences:
Intro (Getting scanned by the Minion Ray and looking at tutorial screen)
Finale (Lowering big Minion hand as girls reveal present, passing through surprise doors, rollercoaster through the carnival, landing and getting enlarged again, doors closing)
Ride Trailer
3D Ride Footage
Animated the Intro, Minion Hand Bridge beat, and everything after they are caught in the Minion Hand. Helped design the Rollercoaster finale.